The Gaining Control in the West

Gaining Control in the West

Corinth: Vertebrae of the Confederacy

Corinth was also called  the ‘Crossroads of the Confederacy’. This was the strategic point at the junction of two vital railroad lines,

Leroy Walker, the Confederate’s Secretary of War, called Corinth Mississippi, the ‘vertebrae of the Confederacy’.

After the battle at Shiloh was concluded, Union General Halleck said,  “Richmond and Corinth are now the great strategic points of the war…”

So, after the battle of Shiloh was concluded, and Island #10 on the Mississippi was captured on April 7th, 1862, it was decided that Corinth was the next target for Union forces in the West. Toward that objective, General Halleck amassed three armies at Pittsburg Landing Tennessee,

1.Grant’s Army of the Tennessee

2.Buell’s Army of the Ohio

3.Pope’s Army of the Mississippi.

Before the end of April, Halleck had assembled almost 120,000 seasoned troops for the attack on the Corinth railroad center. 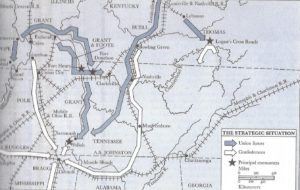 Confederate General P.G.T. Beauregard assembled nearly 68,000 men to defend the strategic rail center. But, after several weeks of siege by Halleck’s Union force, Beauregard saved his army from capture by slipping away on the night of May 30, 1862.

Meanwhile, A union flotilla under Flag Officer Charles henry Davis met and defeated a Confederate naval force at Fort Pillow. This was a Confederate stronghold on the Mississippi between Island #10 and Memphis.

On June 6th, Davis led his flotilla in an attack against a Confederate naval force of equal size. They met just north of Memphis. In just 90 minutes, the Davis force sunk seven of the eight Confederate boats while many Memphis residents watched from the city heights. The Union force gained a complete victory and secured the surrender of the city of Memphis.

Union Effort to Control the Mississippi River By June 1862 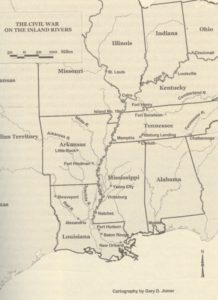 The June 1862 victory at Memphis gave the Union control of the Mississippi River from,

The way was now clear for the Union army to attack Chattanooga, Tennessee in the East and Vicksburg, Mississippi in the West.

The capture of Chattanooga, TE would open the South’s Hartland to invasion. The capture of Vicksburg would not only give the Union absolute control of the entire Mississippi River, but cut the Confederacy itself in half.