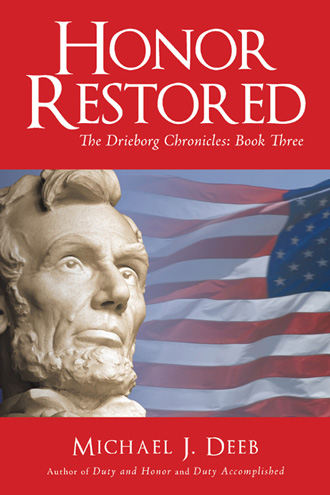 Book three of The Drieborg Chronicles

After four years of civil war, Lincoln’s determination to keep the union together had prevailed.

Then a new conflict began, this time over the nature of that Union. Would the Northern victors allow the old Southern ruling class to regain control, or would a new political and socio/economic structure prevail in the states of the former Confederacy.

President Johnson and the Congress were at odds over that issue.

Michael Drieborg had returned to the life of a farmer. He was no sooner settled than enemies of the Drieborg family killed his wife and adopted son. Michael settled the score, but could not face the memories at home.

He returned to Washington to work for Congressman Kellogg. There he found himself in the midst of the early struggles of Reconstruction. Reunited with troopers from his old unit and allied with Congressional Republicans, he had to deal with Washington intrigue, wartime enemies, a fleeting romance and South Carolina’s struggles to recover.

Thanks to all of you that have purchased my third novel!