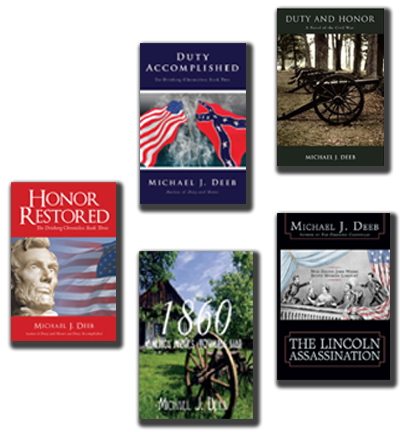 Dr. Deeb published his first Civil War era historical novel, Duty and Honor in 2007. The second novel in this trilogy, Duty Accomplished was published in 2008, the third, Honor Restored in 2009.

There are now 5 Civil War Novels in The Drieborg Trilogy.

These novels follow the story of Michael Drieborg, a naive farm boy, as he serves in the Union Cavalry becoming a seasoned cavalryman. From the harshness of training camp we see Michael drawn into the intrigues of Washington D.C. and the arms of the congressman’s daughter. Wounded at Gettysburg he only survives to be later captured and sent to Andersonville Prison.