It is generally known that General U.S. Grant smoked cigars. During the Civil War period, cigars, pipes and chew were the popular forms of using tobacco. When the war began, Grant enjoyed an occasional cigar.

And when he led the Union forces to victory at Fort Donelson in February 1862, he became a much-publicized hero in the Northern press. At that time, he was pictured in the press during the fighting clenching a cigar in his teeth. So, it was natural that people thought he liked to smoke cigars. 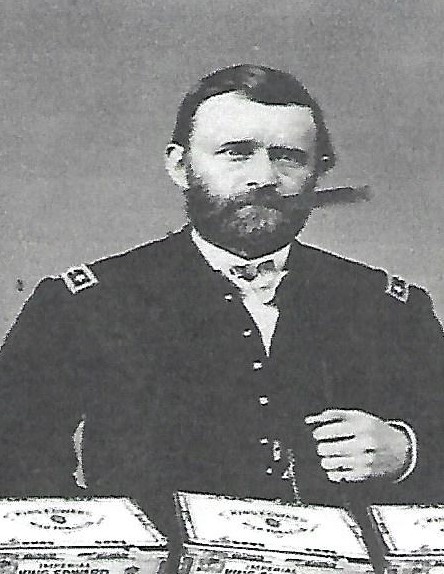 “I had been a light smoker before the attack on Fort Donelson.” He said to an aide. “(But) in the accounts published in the papers, I was represented as smoking a cigar in the midst of the conflict; and many persons, thinking, no doubt, that tobacco was my chief solace, sent me boxes of the choicest brands… As many as ten thousand were soon received. I have away all I could get ride of, but having such a quantity on hand, I naturally smoked more than I would have done under ordinary circumstances, and I have continued ever since.”

His popularity grew when it was reported that General Ulysses S. Grant demanded of the Confederate commander at Ft. Donelson, unconditional surrender of the fort and his 15,000 man army Thereafter, Grant was called ‘Unconditional Surrender Grant.’

The flood of cigars continued. So did his smoking.

He is said to have continued chain smoking cigars while he was President of the United States. Shortly after leaving office, he was diagnosed as having cancer of the mouth/tongue. He died a few days after finishing his hand written memoirs.