Upon the loss of Fort Sumter, the Lincoln administration ordered the states to provide 75,000 troops  serving for 90 days to force the states in rebellion back into the Union. Unwilling to participate in military action against sister slave states, several border state conventions  those in Virginia, North Carolina, Tennessee and Arkansas (with Kentucky deciding to remain neutral)  voted to leave the Union and join the Confederate States of America. The leaders in these states had wanted to remain in the Union. They were forced to chose between going to war against fellow slave owners or joining them.  Virginas, Arkansas, North Carolina and Tennessee joined the CSA.

This gave the CSA a northern border of the Ohio River, a southern one of the Gulf of Mexico, the Atlantic Ocean to the  East and Texas to the southeast. It also gave the CSA control of New Orleans, the Mississippi River and the rivers which flowed into it. This galvanized the Midwest states to support a war to regain control.

The Union meanwhile declared an embargo around these boundaries with the intention of preventing the export of cotton et. al and the importing of enumerated lists of goods as dwell. 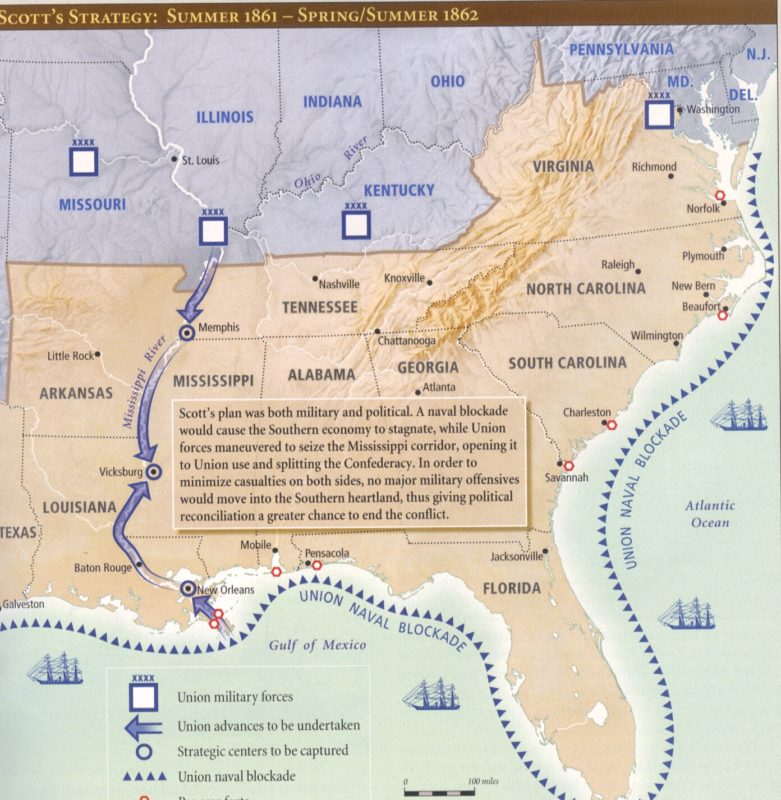 Because the CSA had no navy, the Union had the advantage even with it’s small sea going navy. Neither side had a river navy.

The leaders of the Confederate States decided to defend all their borders. On the face of it, even then, this was seen as a difficult goal. For example, the barrier islands of South Carolina and Georgia could not be held and were immediately abandoned to the Union.

And, with such a long border to defend, the CSA had the challenge of responding to northern attack at points of the Union’s choosing. The CSA was forced to respond as best it could along a very extended border. And, on top of all that, the longer the conflict lasted the stronger the Northern position would become.

So, Confederate leadership decided on the long game and a defensive rather than an offensive approach to  the war with the North. They decided to make the people of the North pay dearly in blood and treasure.

They hoped to defeat the Union armies often enough and inflict enough casualties often enough that the people of the North would force Lincoln to give in and let them go. After all, they only wanted  to be free of Northern domination  and to be left alone. They would still be good customers for Northern manufactured goods, financing, shipping and agricultural products like grains.

Despite this, after the Confederate Congress passes a low import tariff (a revenue tariff), in March 1861, it was feared by Northern leaders that the low tariffs of the CSA would give an advantage to European suppliers and thus ruin the Northern economy. So, they changed their mind and instead of opposing war (‘war is bad for business’) supported Lincoln’s determination to restore the Union by force, if necessary.