The Battle of Shiloh Begins

The Battle of Shiloh Begins

It was the weekend of April 5th & 6th, 1862. Grant’s headquarters was in a riverside home a few miles upstream form Pittsburg Landing. He was on crutches, and very irritable. He was recovering from an injury to his leg suffered when his horse stumbles and fell on him.  He was awaiting the arrival of General Buell and his 25,000 men. Grant knew Buell and thought of him as having the ‘slows’. In any case, Buell was expected soon.

Grant’s force had their backs to the Tennessee River and were bivouacked facing South. Because of the temporary nature of the encampment, it was said, little was done defensively. That meant that the men were not encouraged to dig entrenchments on their southern flank facing the Confederates in Corinth.  As it turned out, pickets and mounted patrols were not stationed far enough out to give adequate warning of attack from that direction, either. In fact, on the Sunday morning of April 6th, General Sherman was irritated with reports by his patrols of activity south of his encampment.

Confederate General Albert Sidney Johnson had his headquarters some ten miles South. He was in the process of gathering a force equal to that of Grant’s. He even took soldiers from as far away as New Orleans. He was expecting several thousand seasoned soldiers from Arkansas as well. There, CSA General Van Dorn, like Grant’s General Buell, had a case of the ‘slows’. He was expected very soon, too.

Johnston knew of Buell’s troop movement toward Pittsburg Landing and hurried to launch an attack on Grant’s force before the Union force was reinforced by Buell. Johnston was confident that he could drive Grant into the Tennessee river, then swing and face Buell’s force. A victory against each of them in turn, would reverse the effects of Grant’s victory at Forts Henry and Donelson. this would thus reestablish Confederate control of Nashville and western Tennessee. But Johnston knew it was imperative to attack Grant before he was reinforced by Buell.

And, he managed to do so, just barely. 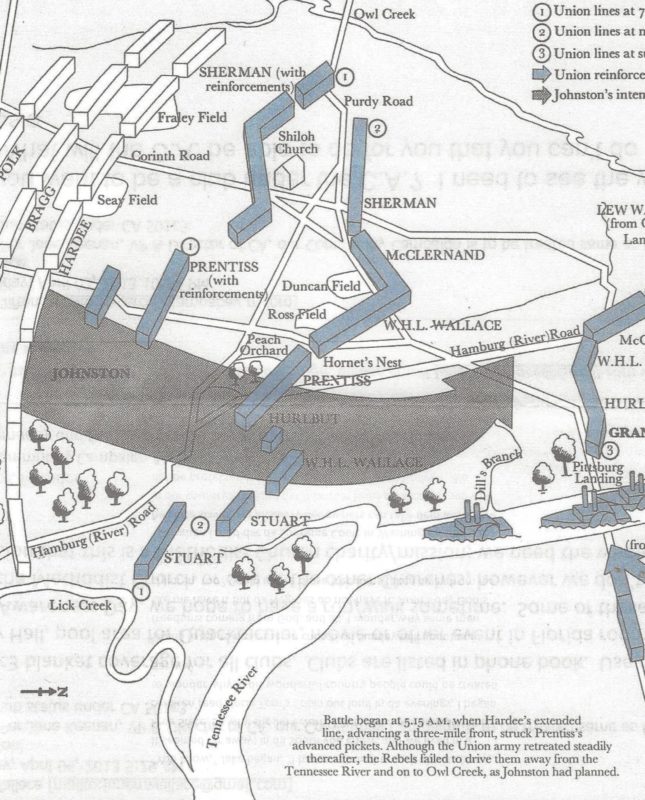 In preparation he directed his second-in-command, General Beauregard to come up with a plan of attack. By the time the plan was ready it was already the beginning of April. General Johnston was not ;leased with the clumsy nature of the plan but refused Beuregard’s suggestion to delay while it was fixed. Johnston knew that time was not on his side. So, he drove his commanders forward.

But the Lord had other plans and sent torrential spring rains to create a morass of mud which slowed Johnston’s advance to a crawl. His men had been give three days rations to complete the march North. But instead, by the time they managed to reach the point of attack, four days had passed. With rations exhausted, some men broke the needed silence of the approach to hunt game. Johnston drove forward, just the same.

Despite the noise and the confusion and effort of the difficult march, the attack came as a surprise to Sherman’s troops. They were enjoying a leisurely Sunday morning breakfast when they first heard the ‘Rebel Yell’ and the sound of the Confederate cannon. It began a virtual route.

But the Confederate’s did not take advantage of the situation. Many of the first rebel troops to enter Sherman’s camp paused to pillage. Others stopped to eat the breakfast prepared by the fleeing Federals. Even some of their inexperienced officers joined their troops. As quickly as possible, Johnston ordered the next Confederate units in line to pass through the stalled initial attackers and renew the advance.

However, the opening momentum had been largely lost. and with it, Federal officers had been given time to c alm the initial panic of their men, to slow the retreat and to form a defensive line with enough men to blunt the impact of the surprise attack; at lease long enough for other Federal units to join the battle.

The area chosen for Grant to gather his men (Ptitsburg Landing) and the site of the battle of Shiloh, was different from most land on which Civil War battle had been or would be fought. It was different in that once the fighting joined the awful terrain of Pittsburg Landing made control of the fighting forces almost impossible. Thick bushes with oak and other hardwood forest cut by deep ravines, man filled with water from the recent rain, ridges and mucky swamps dominated the battlefield.

Because of this, the battle broke down into over 150 individual fights between units as small as as companies and regiments; most of them out of sight of one another.

The confusion caused by the land was made worse since most of the men on both sides were green who were led  by untested green officers. In the Confederate army, most all the junior officers had been civilians prior to the battle.

Never-the-less, Johnston’s Confederate force drove Grant’s back to the river. By late afternoon, the water of the Tennessee River was so high and the reb forces to close that the two federal gunboats on the river could fire grape shot into the advancing Confederate troops. General Johnston believed that one more push would man victory for his forces.

But it was not to be. Johnston’s second in  command was ill and in his absence his aide, Colonel Taylor refused to release needed ammunition to the critical areas when it was needed. It was at this important juncture that several thousand of Buell’s troops arrived and helped bolster the Federal lines. Dusk was approaching on the battlefield and the Confederate troops were near exhaustion and low on ammunition.

At this very juncture, General Johnston caught a stray bullet and died.

Once notified of Johnston’s death, Beauregard ordered the attack halted. He decided it was too late in the day to continue the battle, his force too exhausted, too disorganized and in need of supplies. Besides, he thought, Union General Buell was still a day or two away from Pdittsburg Landing. Better to review the battle the next morning. He telegraphed his superiors in Richmond that despite the death of General Johnston, a great victory had been won.

In the next newsletter I will go over:

The Aftermath of Shiloh